This morning's activity was Thumb War. The students were well behaved as they battled and a good time was had by all!

6th graders met with their 2nd-grade buddies and played mancala. It is fun to watch the interactions between the two age groups.

All of the information regarding the Math Team for Rio del Sol has been turned in! Yeah!
Posted by Ms. Townsley at 3:45 PM No comments:

First thing this morning there was an email sharing award-winning Rio Film Festival Films and my class had one of the winning films for Best Vocal Performance.

Everyone uploaded a copy of their STMath progress into Google Classroom. The results are not so good but at least everyone in attendance was able to upload the photo.
I found out that I have 11869 Bonus points in my Scholastic Book Club reserve! I ordered 15 books for our classroom Book Club. Five copies each of Crossover, Tasting the Sky, and Firegirl.

Field Trip Friday! Over 10,000 steps before getting home.

6th graders taught 2nd graders to play math games to help build adding and subtracting skills. Many students paired their buddies up to play each other after teaching them. It was just what I was getting ready to ask them to do!

Several students asked me to read aloud when they noticed it wasn't on the daily schedule. So I read aloud to them and Ms. Lauer shared a poignant personal connection to the story.
Posted by Ms. Townsley at 4:36 PM No comments:

Students worked on their Ancient Civilization projects and ran into difficulties but didn't give up! 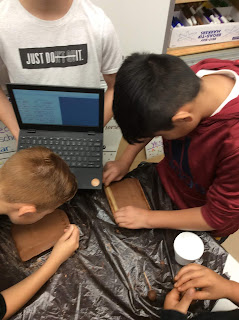 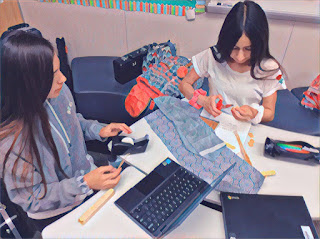 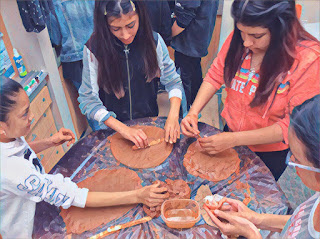 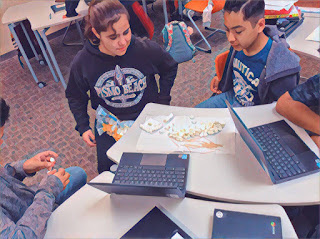 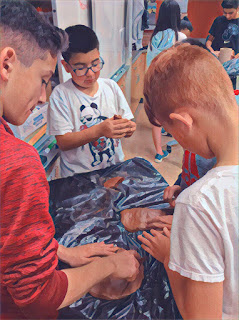 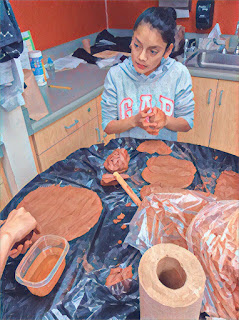 The students who would like to represent 6th grade for the Rio del Sol math challenge met in my room at lunch today. They were SO excited to represent our school. They worked hard on math during lunch and asked repeatedly about when they will find out about the results of their labors. So cute!

Betsy Pegler delivered some art supplies and took the time to look at the student projects and talk to them about their ideas. 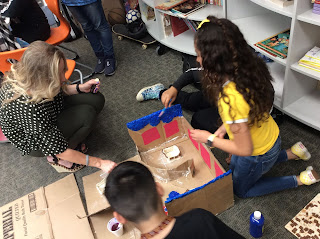 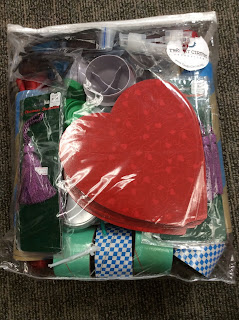 The day started in the library then moved to a LOUD cafeteria with Hip Hop Mindset. Most students LOVE this so much that they have trouble containing their excitement.

The engineering projects for Ancient Civilizations are amazing! The Ancient Hebrews group is making a 10 commandments tablet and the Ancient India Group is trying to make a large pottery container but are not sure if it will work out. Their discussions are interesting.

P.E. was outdoors and students got to choose their stations. There were more people in my Pickle Ball section today. I played Pickleball with Ayden and it was fun.
Posted by Ms. Townsley at 4:56 PM No comments:

Great first day back. The students made me laugh over a variety of little things throughout the day.

Hannah gave me a couple of books she got in Vietnam. 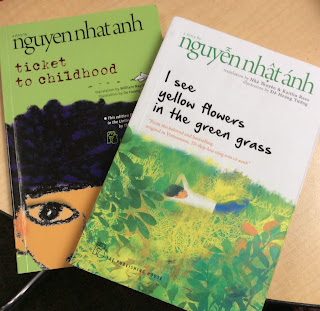 I picked up the new middle school reading club books at lunch and finished reading Space Boy 3 by Stephen McCranie. 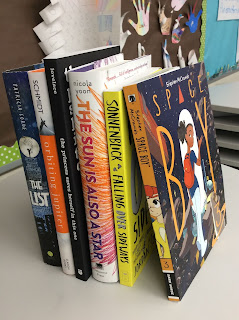 DAY OF THE PHOENIX!

Just as the day began, Amadis presented me a Birthday Princess array to wear since my birthday is during Spring Break. Then the class sang Happy Birthday to Lexie and me. (We're birthday twins.) 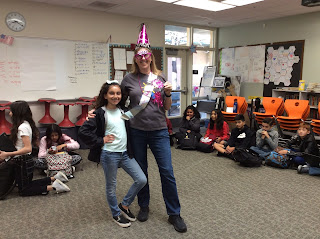 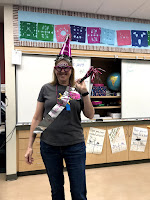 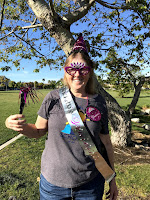 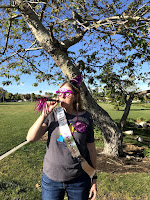 Today was mascot assembly day and showcased some truly amazing creativity and talent.

The Galaxies entered the stage with the thunderous tones of the Star Wars theme and proceeded to sing, dance, and encourage the Rio del Sol students to vote for Galaxy as the mascot.

The Wolves followed with a series of incredible presentations that were similar to plays. Each student was festooned with wolf ears! There were cheers that might be performed at school events and games. It was incredible!

I was feeling quite a bit of angst! We were under the impression that we needed a song, a representative of the mascot, and a speech, so that is exactly what we had prepared! Mr. Romano made some AMAZING tokens using his 3D printer that displayed the name Rio del Sol and a Phoenix. Some girls came up with a cheer at the last minute. They did an amazing job.

Students were given a link and had to vote by 1PM. I'm was surprised and thrilled that the Phoenix was the winner as the Rio del Sol mascot.

Today the 6th graders taught the 1st and 2nd-grade buddies to play Mancala. Since we didn't have enough egg cartons, students drew games on paper. The creativity was inspiring! Alex figured out a way to use the 18 egg carton to play the game. 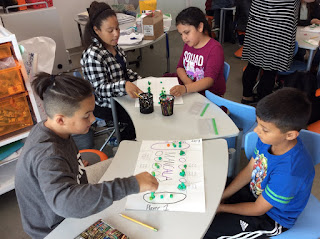 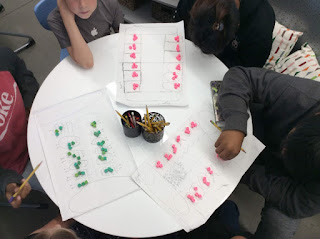 I also was able to enjoy two musicians from Finland playing Sibelius on Cello and Piano. Teena from my CFG group was there as well.
Posted by Ms. Townsley at 9:25 PM No comments:


The Democracy Group finished their Storymaker Project! Yeah! So creative.

The whole class worked together to write a speech for tomorrow's mascot assembly. I was impressed with all the wonderful ideas. This is the final edited version:

A new school, Rio del Sol is part of the Rio school district. The school is still in progress, but when it’s finished, it will be a great school. And what does a great school need? A great mascot! We think the Phoenix would fit in perfectly, here’s why. The Phoenix is associated with the sun, due to being a firebird. And so is del Sol, what a coincidence!


The Phoenix will show the character of our school being able to soar through our troubles and get stronger and smarter throughout the school years. Because of the Phoenix being able to regenerate, this means that when we get knocked down we will be able to recover quickly.


The Phoenix also represents beauty and hopes and that anything is possible and that we are smart in every single way. The Phoenix is also a symbol of strength and victory. The fire represents how we burn through struggles. In Greek mythology, the Phoenix is known to outsmart most of their predators.
The Phoenix should be the Rio del Sol mascot.  The Phoenix is like a bird flying to the sun and that’s like the journey through a new grade. When you get to the sun it's like getting to summer and you stay there for a while. When you rise out of the sun it’s like entering a new grade. That keeps continuing until you get out of school and you're a full-grown Phoenix or adult.


The Phoenix should be the Rio del Sol mascot.  The phoenix represents a strong rising fearless leader. We say this because like the Phoenix, we rise to our challenges, and we are not afraid to make mistakes because we know that they make us better learners.


GO vote for the PHOENIX!

Tonight was the first Rio del Sol Family Math Night! I had fun with the students and parents. 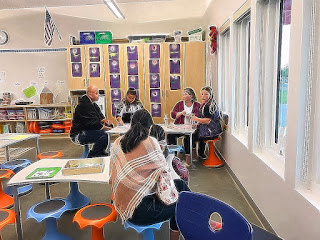 The sky was gorgeous! 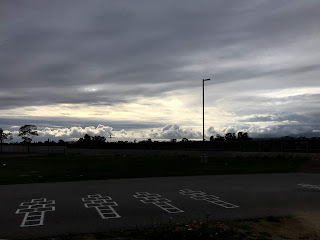 More student presentations on Body Systems today. They were interesting and well done. 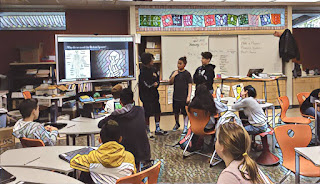 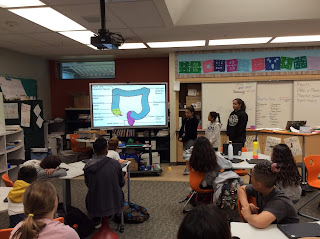 Students ran the mile and everyone finished under 16 minutes.

I had to race to Rio del Sol for the staff meeting but was very happy when I arrived in time to see Mr. Conelly honored by the Rotary Club of Oxnard.

The note from the sub made me laugh a bit although he reported needing ear plugs! 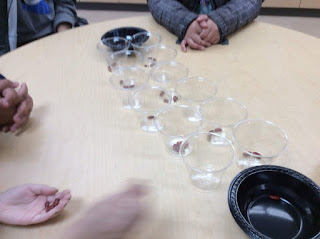 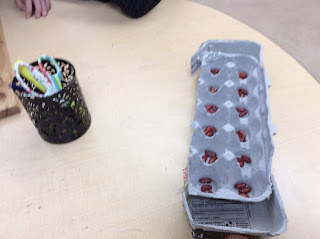 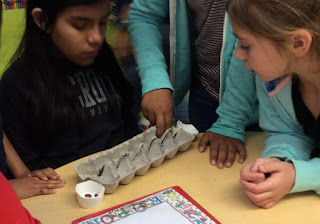 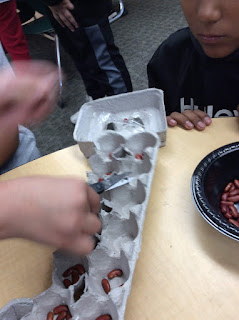